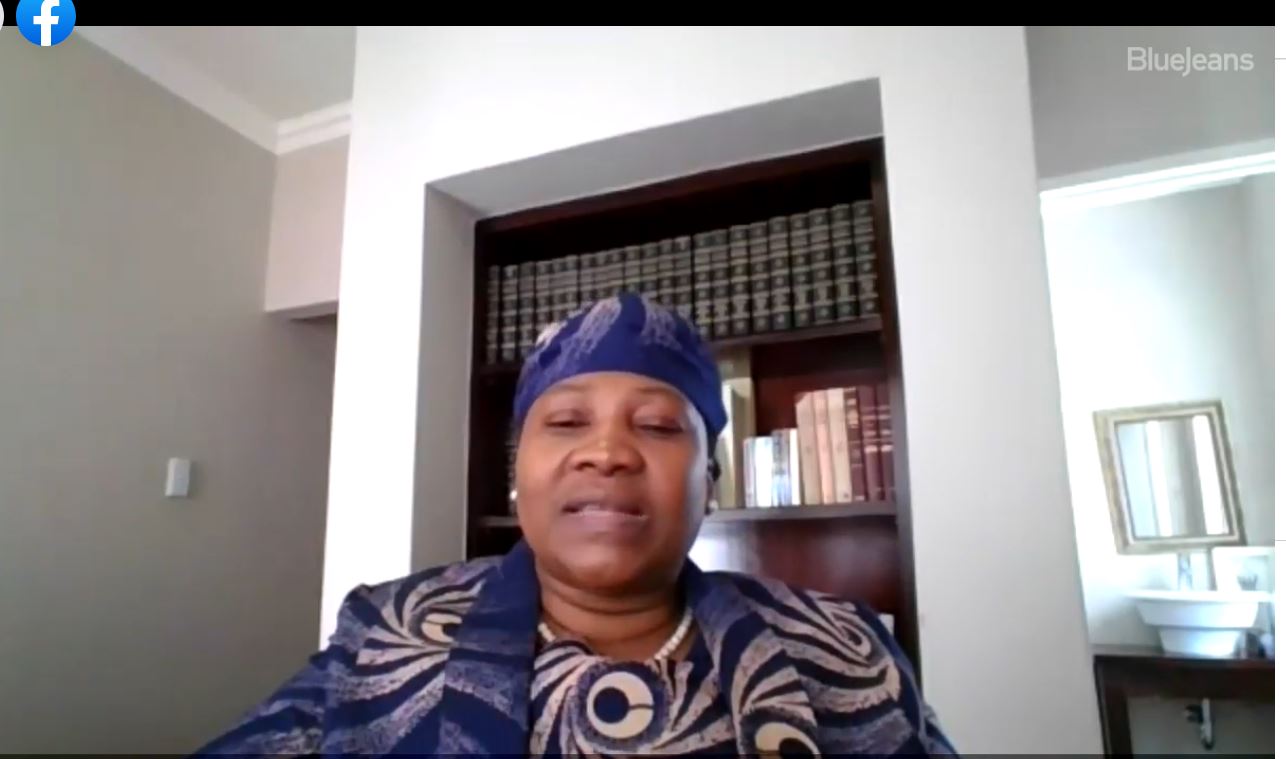 Excellencies. Honorable, Ladies and Gentlemen, A very good afternoon to you all.

I am honored and pleased to be able to join you all and make some remarks on this exceptional day in our annual calendar - International Women’s Day.

For the world’s women and girls, the winds of positive change began blowing one hundred and thirteen (113) years ago, with 15,000 women marching through New York City to demand shorter working hours, better pay and the right to vote.

What began as a labor movement in 1908 was declared the first National Woman's Day in 1909 by the Socialist Party of America. In the years that followed, the Progressive Campaign for Suffrage gained momentum and this determination has spread across the world. Milestones of change kept the fire burning and in 1975, International Women's Day was celebrated for the first time by the United Nations.

Today we meet virtually to mark International Women’s Day under the dark cloud of Covid -19. Although this global pandemic has been largely indiscriminate in its devastation, there is growing evidence from different parts of the world that women and girls are bearing a disproportionate impact of this novel malady. Indeed, reports of many schoolgirls falling pregnant during lockdowns and a spike in cases of Gender Based Violence have featured in our different media. This calls for our collective attention.

The famous writer Diane Mariechild is on record as saying: “A woman is a full circle. Within her is the power to create, nurture and transform.” Indeed, women, who incidentally are the majority in the world’s population, have the potential to bring about the change we all desire, whether this is in business, politics, or society in general.

As we remember all the battles women have endured from the 1900’s to today, let us take this opportunity to appreciate that Women's political participation is a fundamental prerequisite for gender equality, democracy and for the achievement of the 2030 Agenda for Sustainable Development.

Many more targets that seek to secure and protect women’s health and wellbeing are embedded in the entire spectrum of SDGs deliverables and other development frameworks.

Sadly, the realization of progressive provisions has been elusive due to various reasons. Women’s Full Political Participation has been challenged by inter alia:

-       “Paucity” of women leaders across all branches of government.

-       “Token” presence[1] in which women may be too few to change the existing patriarchal structure.

-       “Illusion” of women in highly visible roles in political leadership, yet they lack power.

-       “Reserved” seat quotas that create the impression of inclusion within patriarchal structures with - “Exclusive” members of elite political families/ dynasties being beneficiaries of nominations.

-       Violence against women politicians that is pervasive limiting women’s entry to formal politics.

It is important to appreciate “women’s political effectiveness”[2] as “the ability to use ‘voice’ to politicize issues of concern to women, to use electoral leverage to press demands on decision makers, to trigger better responsiveness from the public sector to their needs, and better enforcement of constitutional commitments to women’s equal rights.” Certainly, few women leaders can be said to have this level of effectiveness[3].

In spite of the challenges that I have alluded to above – which are only a few of many – the struggle continues. The SADC Parliamentary Forum, which I represent, particularly concurs with studies[4] that have found “the percentage of women in the legislature is a principal determinant of women’s policy responsiveness and of women’s confidence in the legislative process.” In other words, numbers, and proportions of women in parliament greatly impact their substantive and symbolic representation.

I respectfully submit that Regional Parliamentary Bodies have a key role to play in changing the tide. We need to address and overcome identified challenges. Of ultimate essence shall be advanced tracking and measurement of the following elements that will ensure progress of women in political participation: -

Putting in place model legislative frameworks to promote, enforce and monitor equality and non-discrimination on the basis of sex is key. Model laws are elaborated as tools of technical assistance, that assist governments translate their obligations under international and regional treaties into national legislative provisions.

Measuring model laws that address women’s issues and the extent to which they have facilitated the review and amendment of existing national legislation (as well as the adoption of new legislation) is a key indicator of an enabling or  supportive environment for women.

The model provisions essentially support the meticulous process of drafting a law. In the SADC region, this strategy has been very effective in the design and adoption of SRHR and HIV&AIDS legislation across the 15 Member States.

Evidence shows that only 24.9 percent of national members of parliaments worldwide are women and only 21.3 per cent of health ministers are women. Measuring progress and setbacks in this regard is important. We need not reinvent the wheel as we can learn from the monitoring work of the Inter-Parliamentary Union (IPU), which maintains a website ranking the share of women in national parliaments in 190 countries worldwide. The data on both lower and upper chambers is updated every few months as new elections are held.

We must recognize, document, and overcome the barriers to ascension. The supply of female aspirants to political office is shaped by women’s access to resources, like time, money, and experience, and their levels of motivation, such as drive, ambition, and interest in politics. Although these elements may be difficult to measure directly, it is possible to devise indicators to monitor the effectiveness of particular interventions intended to increase the supply of female candidates and the existence of changes, if any, in the numbers of women coming to participate in politics.

Although the numbers of female politicians have increased worldwide over the past several decades, from inching close to parity in Nordic parliaments to exceeding parity in Rwanda, we have seen the benefit of “fast-track” strategies[5] that rely on reserved seats and candidate gender quotas.

In many parts of the world, women are still hampered by multiple barriers to entry into politics and a host of discriminatory practices. These range from threats, harassment, and intimidation to gender-biased workplace norms, discourses, and hierarchies[6]. We need to variate and apply the fast-track strategies by breaking the political recruitment process down into its successive stages so that we can make substantial gains in women’s political participation. One is increasing women’s political resources and ambitions, revising selectors’ attitudes towards female candidates, and changing public attitudes towards women in politics. The effects of working toward each of these individual goals is likely to be amplified when multiple strategies are pursued simultaneously.

Regional Parliaments have the opportunity to sustain political momentum on topical issues that impact women and these include Universal Health Coverage, ICPD25 and Gender Equality. While commitments on these issues have been made at the global and regional levels; national parliaments can establish monitoring and accountability frameworks that map progress and inspire action.

Findings from thematic policy evaluations provide the opportunity for policy review and change. They also provide for issue positioning and for the promotion of policy coherence especially when international standards and regional frameworks are the subject of adoption.

Further work is needed to establish the interrelationship between different indicators and targets, including those that impact on women’s participation and leadership at all levels of decision-making. This will enable for design of improved multilayered strategies and broadening of the fiscal space through oversight, prudent and responsible public finance management. Indicators must not only measure if women are represented, but also the extent to which they are able to be actively involved in and influence decision making processes at all levels through their participation.

Aspiring women politicians from whatever station in life also have the responsibility to win the confidence and trust of the electorate. One way to do that would be to develop themselves into knowledgeable advocates on issues that appeal to electors.

For example, apart from just making themselves available for election, in this era of Covid-19, women can be at the forefront advocating for laws and policies that increase access to online education for girls and preventing early or unwanted pregnancies or strengthening the delivery of comprehensive sexuality education. They can also call for policies and other interventions to support women whose livelihoods have been disrupted by Covid-19. This is important given that UNDPs rallying theme is Achieving an Equal Future in a Covid-19 World.

In conclusion, measuring progress requires us to capture complex qualitative and quantitative indicators that can tell us about the changing realities of women’s lives. Monitoring women’s political participation comprehensively requires:

In providing a holistic approach to measuring trends at all stages of the political process, we can track progress, and design new interventions, strengthened by careful attention to evidence and impact.

And finally remember this…Measuring numbers is not enough. It has been widely argued that the number of women in representative politics is not the best indicator of women’s actual political participation. Increased numerical representation does not automatically translate into increased influence for women: having a seat at the table does not guarantee that a woman will have the opportunity to speak, or that she will be listened to.

Understanding and measuring perceptions is particularly important for measuring changes in women’s participation and leadership. Understanding how women’s voices translates into influence needs to begin from women’s own experiences.

I will leave you with the words of ~Ruth Bader Ginsburg, and I quote

“Women Belong in all Places

Where Decisions are Being Made”

[3] Some may contend that women who are political leaders do not necessarily support the women’s movement or feminist causes. While this may be true, we make no assumption that women holding formal leadership positions will advance the interests of women more than men.