Women Must LEAD! "We need feminist leadership in Kenya”

Women Must LEAD! "We need feminist leadership in Kenya” 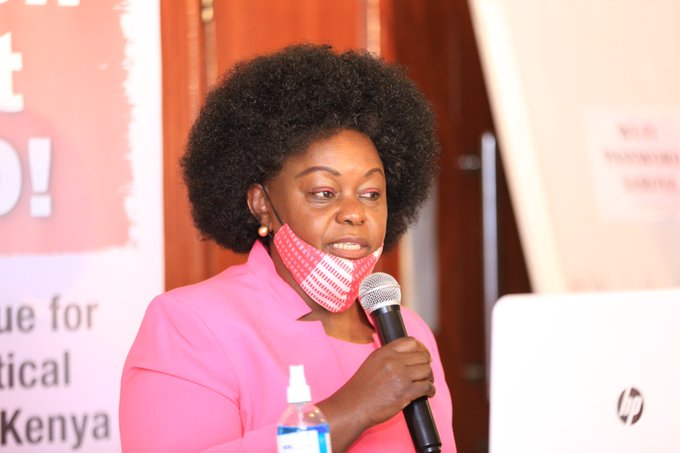 Ten years after the promulgation of the Constitution of Kenya (2010), women are asking what is there to celebrate when several gains to women’s representation and participation in leadership continue to be eroded, ignored and replaced with self-serving interests? “How do we celebrate when the two thirds gender rule has not been fulfilled in all arms of government not even in the county assemblies where only eight counties are compliant meaning thirty-nine are not!” was the powerful reflective question posed by Hon. Martha Karua during the “Women Must Lead” Policy Dialogue held on 28th August 20202 in Nairobi, Kenya. The Dialogue organized by the African Women’s Development and Communication Network (FEMNET) in partnership with International IDEA and WPP Consortium partners[1] brought together close to 30 women leaders to reflect and strategize on women’s political participation in Kenya.

Hon. Karua called on the women leaders to familiarize themselves with the herstories journeys of women leaders trailblazers and connect the struggles of equality. Hon. Karua reminded the meeting delegates the long treacherous journey leading to the promulgation of the Constitution of Kenya ten years ago, where women leaders stood together in solidarity to consolidate the gains, thereby overcoming the politics of divide and rule along political lines. Cognizant that both women and men live and are raised in a patriarchal society that privileges and prioritizes men, Hon. Karua emphasized the need for women leaders to redefine solidarity and work together to heighten consciousness around dismantling patriarchy and normalized discrimination against women.

As women we must stand in solidarity with one another to move the agenda for equal and meaningful representation and participation of women in politics and decision-making spaces” said Hon. Karua. “Get to know the herstory from your family perspective, from the neighborhood, from our communities, from our country and from the world over, and by the time you are done, you will sign up for the SISTERHOOD, yes SISTERHOOD, because our brothers have an understanding of brotherhood that is activated automatically when male privilege is threatened.

In his opening remarks, Prof. Adebayo Olukoshi from International IDEA – Institute of Democracy and Electoral Assistance noted that despite increased awareness on the imperative of including women in governance systems through rules, standards, instruments at national, regional and sub-regional levels, it is important to recognize that women’s representation and participation in governance remains insufficient and incomplete.

Kenya’s last general election in 2017 saw a nominal increase for women’s representation in politics with the first time entrant of three women governors and three women senators compared to none in 2013. More women were elected to the national and county assemblies (23 members of the national assembly in 2017 compared to 16 in 2013 and 96 members of county assemblies in 2017 compared to 82 in 2013). Another sad reality is the fact that women still hold few leadership positions as committee chairs or speaker positions in the Senate and National Assembly and have been unable to breakthrough into significant committee assignments or other influential positions.

Hon. Gathoni WaMuchomba, Chairperson of KEWOPA – Kenya Women Parliamentary and the Member of Parliament of Kiambu County reminded the meeting participants of the proactive contribution by women leaders towards the realization of the Marriage Act 2014, the Matrimonial Property Act 2013 and Protection Against Domestic Violence Act among other Bills. Other key legislations such as the Prohibition of FGM, Sexual Offences Act, Access to Information Act among others. However Hon. Wa Muchoba noted that despite several efforts pushing for the realization of the two thirds gender principle“our male colleagues lied to us! They cheated us! On the day of passing the bill they abandoned us.” She called on all leaders to discourage patrilineal politics in Kenya.

“Political parties are the let downs for women leaders in Kenya”, weighed in Hon. Dennitah Ghati, Nominated Member of Parliament. Nominated Senator Gertrude Musuruve said the conversation about two-thirds gender rule cannot be complete without the inclusion of people with disability. She said political parties should make efforts that ensure people with disability get a chance.

Ms. Editar Ochieng confirmed that in 2019, whilst vying for the Member of Parliament in she received immense support from fellow women and continues to be mentored and supported by women in her leadership journey. “I’m committed to challenging and expanding spaces for young women to get into political space to challenge retrogressive policies” opined Editar. We must shift narratives and mindsets. Women are not enemies of women. The great impediments is patriarchy which manifests differently. We need social empowerment to unpack and view women’s leadership holistically.

“Power concedes to nothing without a demand, women must demand in solidarity for the 2/3 gender rule. Let’s push for the amendment of the political parties act, we don’t need to amend the Constitution”. Ms Daisy Amdany, Executive Director CRAWN Trust.

Hon. Millie Odhiambo, Member of Parliament of Suba North reminded participants of the need to support affirmative action, after all men first got into parliament through an affirmative action as many African countries gained independence in 50’s and 60’s.

In the next two years, FEMNET, International IDEA and the WPP Consortium partners are keen to enhance women’s political participation in Africa with a view to advance the goal of gender equality in politics and governance. This partnership is committed to contribute to an increase in the voice and presence of women in all political processes and institutions in Africa at the different levels at which they exist. Through policy advocacy, strengthening of capacities and generating research and knowledge, the WPP consortium partners will work with women leaders and institutions in Botswana, Democratic Republic of Congo, Eswatini, Cote d’Ivoire, Kenya, Senegal, Tanzania and Zimbabwe to expand awareness and demand for the meaningful inclusion of all women in their diversities.

Closing the meeting, FAWE’s Executive Director Ms. Martha Muhwezi urged all the women leaders to mentor young women aspirants to ensure that they too do not go through the struggles our trailblazers went through.

For more information and/or to request for an interview please contact: