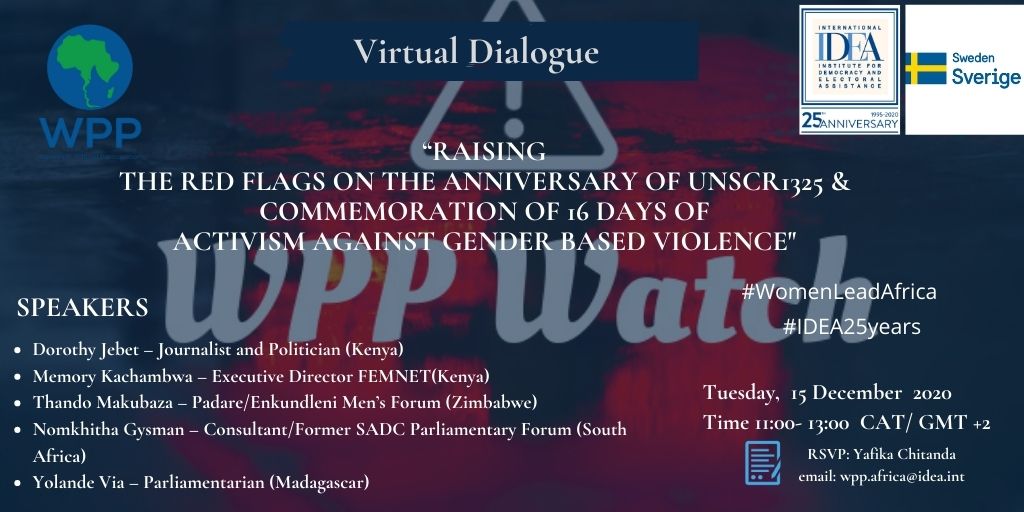 Lack of peace and security is one of the top barriers preventing women from participating in politics. Twenty years on, this webinar is set to take stock of the state of women in political participation in Africa and the contribution that UNSCR1325 has made to increase the number of women participating meaningfully in politics. A number of African countries such as Botswana, Malawi, Tanzania, Cote d’Ivoire, Seychelles held elections in 2019/20 and more are gearing up for elections in 2021. Politically motivated violence against women also linked to election processes have been rampant in Zimbabwe, South Africa, Nigeria, Malawi, Zambia, Democratic Republic of Congo (DRC), Tanzania, Mali, Sudan and many other African states. The number of women in political distress has in particularly increased as the continent battles to contain the COVID-19 pandemic and where resources initially earmarked for peacekeeping have been diverted to the virus.

The year 2020 marks the 20th anniversary of the UN Security Council Resolution (UNSCR) 1325, which established a powerful normative framework to ensure women’s needs, voices and perspectives to prevent, resolve and recover from conflict and build sustainable peace. With the adoption of this resolution, the UN Security Council acknowledged for the first time that efforts to build and maintain peace and security are more sustainable when women meaningfully participate and have influence in political and security decision-making processes, and when women and girls are safe from violence, in conflict and crises.  This resolution set the groundwork for a series of nine additional resolutions on enhancing the roles, perspectives, and needs of women and women and girls in conflict and crises, and that addressing conflict-related sexual violence is a matter of international peace and security.  The year 2020 is a time for celebration and an opportunity for reflection on how this global instrument has paved way for women to participate in politics in the African continent.

This year’s 16 Days of activism against gender based violence comes at a time when cases of gender based violence, in particular domestic violence have surged during the COVID-19 lockdown period. Women in politics have not been spared as they are harassed especially during election period. Elections in countries such as Tanzania, DRC and Uganda have been marred with violence.

Election and politically motivated violence has been a major reason for women to stay out of politics. In some countries political violence and abuse has seen women in and out of prison, subsequently disabling them to carry out their political mandates. Key examples coming from Uganda (Stella Nyazi), Zimbabwe (Joanna Mamombe), Sudan (women whole were at the forefront to oust Al Bashir’s regime) and Nigeria (women at the forefront of the #StopSARSNow protests). While women have borne the greatest burden of fighting for democracy, the rewards have been minimal in terms of women’s representation at all levels of governance. Adding onto this is the continuous persecution politically even for those who have managed to get into political office. There has been improvement in some instances in terms of women’s representation in parliament and speakers of parliament in some cases as shown in the paragraphs below.

The number of female speakers in both upper and lower houses of parliament on the continent totalled an encouraging 16 women out of 75 (21%) legislative bodies according to the Inter-Parliamentary Union in the Democratic Republic of the Congo, The Gambia, Madagascar, Malawi, Mozambique, Rwanda, South Africa, Togo, Uganda, Equatorial Guinea, Eswatini, Ethiopia, Gabon, Lesotho and Liberia. The region is now second only to Europe with seventeen female heads of parliament currently in office out of 70 legislative bodies. This stands in stark contrast with just eight female heads of parliament in Asia, and only one in the Middle East and North Africa.

Africa has been distinct in introducing proactive measures in favour of fast-tracking women’s participation in parliament. Currently, most African countries have at least one gender quota in place, including 13 countries that hold specifically reserved seats for women in parliament as opposed to legislated candidate or political party quotas. These reserved seats allow countries to hold high percentages of women members in parliament, such as Rwanda (61.25%), South Africa (46.35%), Senegal (41.82%), and Ethiopia (38.76%), and include more women and diverse perspectives in legislative decision-making.

These few successes in women’s representation in politics must not obscure the alarming levels of Election Violence Against Women (EVAW) and other politically motivated forms of abuse aimed at women politicians. Young women are also at great risks of such forms of violence with some being threatened with rape and profiled negatively by the media. The role of women under political distress to democracy building must be linked to regional, continental and global instruments that seek to preserve peace and promote gender equality. This year’s commemoration of UNSR1325 should be Africa’s reflection on the value of peace building and meaningful participation of women in politics. It is critical that Women’s political participation must not be a ‘ticking off the box’ process but a rights based approach to equality in politics and peace processes.

African countries need to move beyond just numbers and look at root causes that keep women out of politics. The deeply entrenched patriarchy in all of Africa often manifests itself in violence against women in politics and other spheres of life. There is need to uproot patriarchy through raising red flags of women in political distress. Similarly, governments must be able to hold each other accountable for these red flags through sub-regional processes and instruments. There is need for substantive female leadership to advocate for gender-equal policies and even increase cooperation across party and ethnic lines. Such gender policies help challenge discriminatory laws, increase responsiveness to social issues, and remove legal barriers to women’s access to services and economic opportunities. Laws do not change cultural norms, but they are a starting point for empowering women.

Objectives of the webinar

The main objectives of the webinar is to raise red flags of women politicians in political distress in Africa as the world commemorates the 20th anniversary of UNSCR1325. The webinar will discuss the following:

Outcomes of the webinar